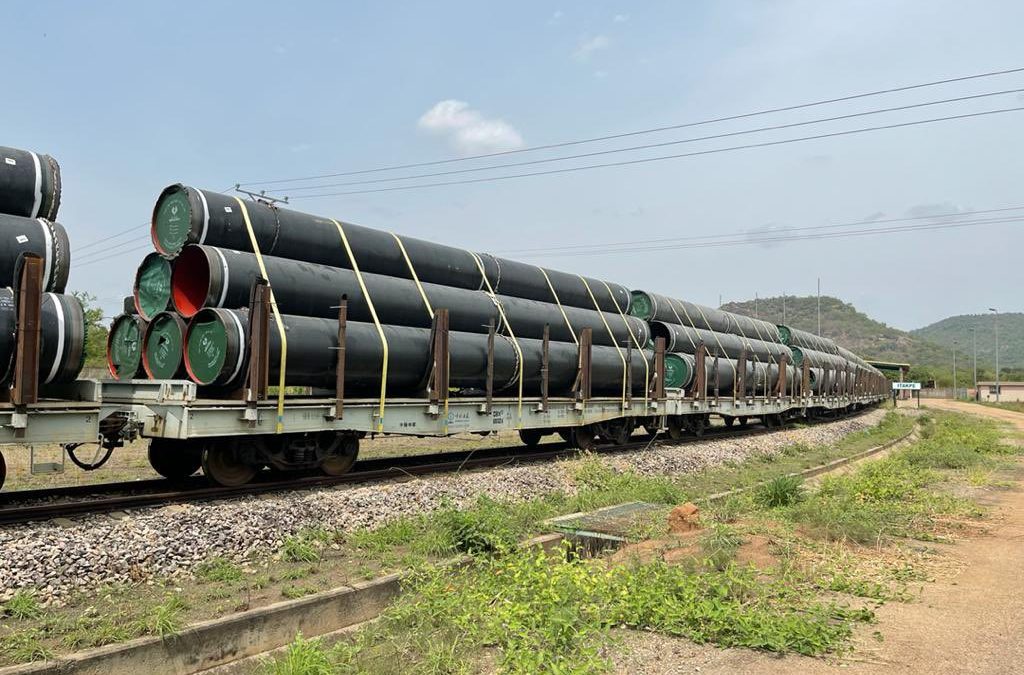 THE execution of the nation’s $2.8 billion Ajaokuta-Kaduna-Kano, AKK gas pipeline project was boosted, weekend, through the delivery of 96 pipes from Warri to Itakpe in Kogi state. The conveyance by rail was made possible through the efforts of the Nigerian National Petroleum Corporation, NNPC, a major stakeholder in the project.

The Corporation, which confirmed this in a message obtained by Vanguard from its Twitter handle, stated: “We congratulate our team on the arrival at 10.25pm 8.4.2021 of AKK gas project line pipes by rail from Warri to Itakpe. Less cost, faster delivery time, safer, protecting our roads and more. The infrastructure revolution is paying up.” It also added: “A major boost in the delivery of #AKKGasProject as NRC Train finally commenced epoch-making haulage of line pipes from Warri to Itakpe. This locomotive, which began journey @ 11.05am on 8th Apr 2021, carried 96 pipes at once, an equivalent of 32 trailers on the road.”

This, according to NNPC, represents phase one of the 1,300km-long Trans-Nigerian Gas Pipeline (TNGP) project, which is being developed as part of Nigeria’s Gas Master Plan to utilise the country’s surplus gas resources for power generation as well as for consumption by domestic customers. The TNGP project also forms part of the proposed 4,401km-long Trans-Saharan Gas Pipeline (TSGP) to export natural gas to customers in Europe. Nigeria holds Africa’s biggest and one of the world’s biggest gas reserves. It’s proved natural gas reserves stand at 188 trillion cubic feet (tcf) comprising 99tcf of associated gas and 89tcf of non-associated gas.

The AKK pipeline is planned to be developed on a build-own-operate-transfer (BOOT) basis under public-private partnership (PPP), supervised by Nigeria’s Infrastructure Concession Regulatory Commission (ICRC).

Recently, Chairman of the Committee, Senator James Manager, had expressed satisfaction with the various gas development projects embarked upon by the NNPC despite the impact of Covid-19 on the oil and gas industry, saying: “We are proud of the AKK and some of your other projects”. Similarly, a member of the Committee, who is also the immediate past Chairman of the Committee, Senator Albert Akpan Bassey, had said NNPC under the leadership of Mallam Mele Kyari has taken the Corporation to a new height by publishing the 2018 and 2019 Audited Financial Statements and for reducing losses by over 95 per cent. He had added: “I want to commend the team led by the present GMD, a team of dedicated and passionate Nigerians. If they can reduce losses drastically within such a short time, I am sure the next report will reveal huge profit to the country. We must give them our support and cooperation.”

However, on completion, the AKK pipeline will transport up to 3,500 million cubic feet (mcf) of gas a day from various gas gathering projects in southern Nigeria for utilisation in the North and beyond. According to plan, the hydrocarbon liquids will be processed at Ajaokuta to produce liquefied petroleum gas (LPG), while the remaining gas will be transported to supply feedstock for new power plants and petrochemical facilities in Abuja, Kaduna, Kano, and Katsina.

The project is constructed by a consortium of two indigenous companies, including Oando and Oilserv which was awarded the engineering, procurement, and construction (EPC) contract for the Ajaokuta-Abuja section of the pipeline in April 2018.