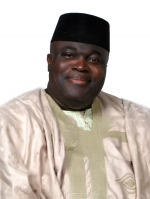 After an impactful period of exceptional achievements in acting capacity including the declaration of the ICRC as the African Infrastructure Regulator of the Year 2018 by Africa Investor Magazine, the Senate last Thursday confirmed the appointment of Engr. Chidi Izuwah as the substantive Director-General/CEO of the Infrastructure Concession Regulatory Commission (ICRC).

The Chairman of the Senate Committee on Works, HE Sen. Kabiru Gaya, said the three senators from Abia, the nominee’s state, endorsed his nomination. President Muhammadu Buhari had in November 2018, forwarded his name to the Senate for confirmation.

Engr. Izuwah joined the ICRC in 2009 as the pioneer Executive Director, Public Private Partnership Resource Department (ED P3RD) where he set up the Department from scratch. In this role, he was responsible for catalyzing Public and Private expertise and resources towards putting in place a world class PPP pre-contract regulatory framework and guidelines for driving the preparation and development phase of Federal PPP Projects. During his period as ED P3RD, the ICRC was declared the African PPP Champion for the year 2010. Engr. Izuwah was the ED P3RD until June 2016 when he was made the Executive Director, Support Services Department (EDSS).

Engr. Izuwah started his career as a lecturer in Fluvial Hydraulics and Water Power Engineering at the University of Port Harcourt, Nigeria in 1986. Thereafter, he held several senior oil & gas asset management positions in a career spanning over 21 years with SPDC (Shell Nigeria). He was at various times Project Manager and Contract Manager for the Deepwater Bonga Mooring and Installation Contract, in this role Engr. Izuwah led the team that towed and moored the Bonga FPSO (the largest FPSO in the world then) offshore Nigeria. He also led the team that fabricated the Bonga SPM Buoy (largest and most technological advanced deepwater offloading buoy then). Both the Bonga FPSO and SPM Buoy are currently serving the nation producing and exporting crude from the world class Bonga field and earning huge revenues for Nigeria’s development and prosperity.

Engr. Izuwah also held the position of Corporate Pipelines Asset Manager responsible for Shell´s entire crude oil evacuation network in Nigeria during the Niger Delta Militancy period. During this very challenging period for our nation, Engr. Izuwah inspired his team of courageous Pipeline Engineers by leading from the front so they could repair damaged pipelines in record time to keep Nigeria’s economic livewire flowing despite regular attacks.